Wow, I guess it's been awhile since I've posted. It's been a rough couple of weeks! Fortunately not too bad for Chloe! She did have croup again, but managed it quite well and is just left with a lingering mucusy cough. We have finally lost our overnight nursing care and are making the transition to caring for Chloe without it. The greatest benefit is that she is back upstairs with the rest of us and we don't have to coordinate her schedule (and OURS for that matter) for the nurses. The downside is obviously someone has to be up with her periodically throughout the night. We're in the middle of changing her feeding and med schedule so that she doesn't require so much attention at night, but at the same time we don't want to make it impossible for her to get out during the day either. 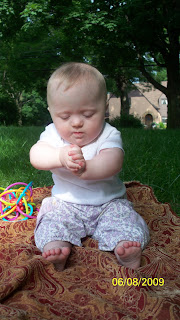 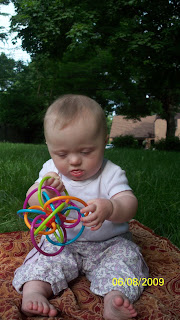 Chloe's doing GREAT with her therapies! Her therapists are impressed with her every week!!!! She's sitting like a CHAMP!!!! (as you can see in the pic!!!) continuing to bear more weight on her legs /arms, reaching and rotating more and just generally doing more and more. It's all very exciting!!!

The only "concern" I have for her right now is she seems to be having some decreased hearing. Both her OT (Occupational Therapist) and I have noticed it. She doesn't follow sounds with her eyes outside of her sight. She's always had very acute hearing. We're seeing her ENT on Monday and hopefully there's just a bunch of wax in there that he can clean out. Fingers crossed. She also sees her eye doctor on Friday. She has mild nystagmus (an involuntary jittering of the eyes), but I don't think it's anything to worry about. In fact I don't think I've even noticed it too much in the last few weeks. 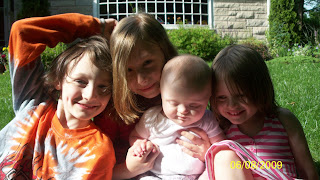 School is winding down for Xander - 7 more days! He'll do several camps over the summer. Sadie will continue with her 2-days/week through out the summer. Our "live-ins" Ali and Kait will be moving out when school ends in the next couple of weeks. Xander and Kait called a "family meeting" to plan the "farewell celebration" comprised of a movie, crafts, cook-out, roasting marshmellows and a play. VERY CUTE! We will miss them very much! LOTS of changes going on in the Mason-Mann household!
Posted by Mama Mason-Mann at 5:43 PM