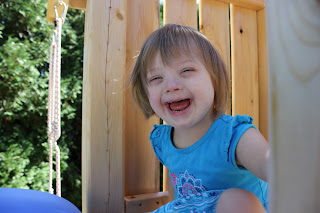 This post, that is, has been a LONG TIME coming.  I originally wrote it back in July, but have had a difficult time posting it.  Not only because I don’t know how it’ll be received, but also because it’s a hard thing for me to admit to myself and deal with. . . accept, and move on.  But as I’ve sat on this post for months now, I finally think (THINK) now is the time.  Please know too, that part of my struggle with posting this lies in the perceptions that we want to convey to expectant and new parents who are truly blessed with a child with Down syndrome.  I don’t want to deter ANYONE from making that choice for life or from feeling they can’t do it, because I believe in my heart EVERYONE has the capability to love and raise a child with special needs if they just allow themselves to be open to a new and (mostly) wonderful world.  But at risk of, well, pissing some people off, I am posting this because 1) it is honest and I feel that is important for my readers and Chloe’s followers and 2) I think it’s OK to say it ISN’T wonderful ALL THE TIME.  There are struggles.  We would all be lying if we didn’t agree to that.  But in our experience, the lows can be real low, but the highs are what we LIVE FOR.  Because they’re amazing (the HIGHS).  Watching Chloe accomplish what should be the simplest task. . . hearing her laugh at her sister and brother. . . hearing her say her name for the first time, or Mama for that matter. . . seeing her touch the hearts of people who didn’t think they themselves could be touched. . . I could go on and on about the HIGHS and fortunately, the lows are much less frequent.  But they ARE present and this is one of those times, still sprinkled in with the highs, therefore preserving my sanity!   Anyway, here it goes:

No, not the game, but what I’m going to say.  I don’t ALWAYS LOVE Down syndrome.  To tell you the truth, this has come as a surprise to me.  I THOUGHT I did.  I mean, don’t get me wrong, I embrace it and LOVE LOVE LOVE Chloe for who she is, but I guess as she gets a little older (but doesn’t seem any older in some behaviors) I start to get frustrated.  And I guess instead of getting frustrated at Chloe, I get frustrated at Down syndrome.  I mean I can’t NOT like her. . . or maybe I can.  . . but instead of that, I don’t like the Ds.  Does this make sense?  Anyone????

Maybe I should be more specific.  Lately (HA! “lately” means for over a year now!) Chloe has been climbing on EVERYTHING.  And the older she gets the harder it gets, because she doesn’t stop doing the behavior, like “typical” kids would, she just gets better at it.  Now she can push the chairs where she wants them or reach things she couldn’t reach before and she’s smarter!  Outsmarting me most of the time.  I don’t know why I feel the need to keep saying it, but I LOVE Chloe (I mean, of course I do!!!!  She’s my child and just because she has a disability doesn’t mean I love her any less.  In fact if you asked my other kids they’d swear I love her MORE, which obviously isn’t true either. ) and it’s hard to admit that this is HARD.  It’s hard having a kid with disabilities.  I guess I’m afraid to say that to scare off anyone with a sweet baby or someone who doesn’t have a child with a disability because one thing I try to convey MOST of the time is the extreme joy and love that we do experience.  Even when things are hard, it’s usually (USUALLY) still filled with this sort of magic that only people who KNOW someone with a disability can understand.  But I also have to tell the truth and it isn’t ALWAYS magic.  It isn’t always laughter and smiles and triumph.

I want her to STOP trying to do somersaults on the porch table.  I want her to STOP throwing ALL her meals on the floor so that at almost 4 years old I’m to the point of having to hand-feed her again.  I want her to STOP getting things off the counter just so she can dump them on the floor.  I want her to STOP writing on every surface she knows she’s not supposed to every time she gets anywhere near a writing utensil (I swear it’s like she has Jedi powers and can mind-meld pens and pencils off the counter and into her hot little hands)!  I want her to STOP getting into EVERYTHING – the toilets, the dog water bowl, you name it. . .  I want her to STOP figuring out how to escape from the house so that I have to have her in my sights at all times or I have to panic wondering where she’s off to.  I just want her to STOP doing these things.  NOT stop being Chloe.  But then there’s always that question I ask myself, if she wasn’t doing all those things, would she BE CHLOE?  Would she still have all those other wonderful characteristics that make her so incredibly special that people follow her story and her life and see the magic in her without even meeting her?  How can I possibly HATE or even DISLIKE Down syndrome without feeling the same way about Chloe?  I mean I know SHE’S not “Down syndrome”, but it is so much a part of her.  It’s in every gene for goodness sakes.  And then, I spend the day at my favorite event of the entire year, the CT Down syndrome picnic, an event that obviously encompasses everything Down syndrome is about – a celebration of ALL its joys and wonders.  And most importantly the “family” that we feel so lucky to be a part of. 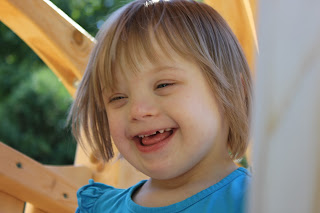 I don’t know where this is headed.  I guess I just needed to get off my chest that sometimes I don’t love Down syndrome.  I always LOVE Chloe, obviously and I love the life we are getting to experience with her.  I guess it’s like I say as kids get older the hard gets harder, but the easy gets easier.  Having Chloe I’ve found, and I am only speaking for myself here, that having a child with a disability the hard is HARD, but the rewards are AMAZING.  And I couldn’t do the HARD without all the support of Chloe’s Crew. . . our “village” that keeps me going.
Posted by Mama Mason-Mann at 3:53 PM 4 comments: