I’ve been so busy I could hardly justify sitting and updating the blog AND my Outlook email isn’t working so I’m unable to send out my bulk email to let everyone know I’ve finally updated the blog, which I’m just sure no one checks it anymore!  So there are my big excuses for not blogging.  Unfortunately it isn’t for lack of things to write about. 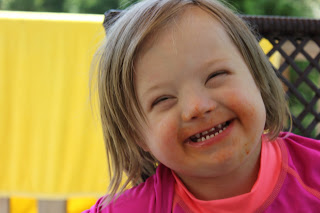 So where to begin is my big question now . . . I guess we’ll go youngest to oldest.  So let’s talk about Chloe.  Once again, Chloe is being Chloe.  What does that mean?  Well for those of you who follow along you’ll understand what I mean, but for those of you who are new to the blog let me explain. . . that basically means she’s giving us drama, but in the end we’re confident it will all work out.

First of all, a little back story. . . back in March Chloe had to increase her thyroid medication and while getting that lab work also got her annual CBC done which came back slightly abnormal sending us to Yale Smillow Cancer Hospital for a Hematology/Oncology consult.  For those not that familiar with Down syndrome, kids with Ds are at higher risk for developing leukemia than “normal” kiddos, so an abnormal reading calls for a manual read by a cancer specialist.  So off we went to Smillow where we were ultimately told that she is fine. . . we’ll do occasional CBC’s if she’s getting stuck for something else so she doesn’t have to have unnecessary blood draws.

So about 3 weeks ago Chloe collided with another child at school and had a pretty serious nose bleed.  The nurse warned me it might bleed some more that night.  Well, at home, it was a Friday night, she had two fairly significant bleeds (I’ll spare you the gory details, and believe me there were some).  I called the doc Saturday morning and got instructions on how to handle the bleeds and when to consider it in need of further intervention and of course she had no more bleeds.  Come Tuesday afternoon I noticed a few drops on her shirt and some dried blood in her nose.  I wrote a note to the school and low and behold she had a 20 minute nose bleed on Tuesday and they neglected to notify ME or the NURSE!  Oops!  I don’t remember the exact timeline, but she had another big nose bleed in the middle of the night all over her sheets and a few more medium to big ones at home, so we took her in to see the ENT.  Didn’t appear broken, and they recommended saline spray and antibiotic ointment in her nose to help it heal and sure enough that did the trick.  Shortly thereafter I started noticing easy bruising and red spotting type bruises that seem to appear and go away fairly quickly.  Since she was due for her thyroid screen and they were going to stick her anyway, it seemed appropriate to get another CBC.  So here we are with another “abnormal” CBC, in fact exactly the same as last time.  They’re seeing us to do a manual count again, which we expect to be fine and then to devise a plan on how to monitor her going forward, including establishing a new “baseline” for her.  We really aren’t too worried.

Since starting this post I have a new story to add. . . don’t worry, I’ll be brief.  After returning home from an awesome Open Playgroup with friends Chloe was headed outside to see her daddy and was at the top of our wooden deck stairs, when our beastly black lab mix “puppy” barreled right past her sending her cart wheeling in a dramatic fashion, all the way down the stairs.  Stacey (her dad) and I watched helplessly.  It was so dramatic my instant reaction was to just call 911, but after sitting with her for a minute, I realized that was unnecessary.  About 20 minutes later an atypical midday nap warranted a call to the doc, but we determined she was fine.  So aside from my bumps, bruises and scrapes, she came out of it ok.  sigh.

Sadie’s our “stable” one (ha ha – that says a lot about our family. . . tee hee).  Aside from a badly bruised ear and a swollen cheek bone (two separate incidents), she’s been keeping me somewhat sane.  Don’t get me wrong, she has her moments, like everyone, but for the most part she’s in a REALLY good place.  (knock on wood).  She’s into fashion and playing with friends and listening to music. . . and that about sums her up.

Then there’s Xander.  Xander is a very long story, which because of his age, I will avoid the in-depth details.  Falling grades, psycho-education assessments, and doctor appointments have led to the understanding that Xander is VERY bright, YET has an extremely discrepant Processing Speed.  There is some dispute as to whether he has a learning disability (between our pedi and his therapist who both feel strongly that he does and the school who does not) so we are left fighting to help Xander be understood better and to get him the services he so desperately needs.  Aside from school Xander is playing spring hockey and enjoys video games and hangin’ with friends.
Stacey and I are busy busy busy.  Between work and spring duties, and getting the kids to their many appointments and coordinating and advocating we are just trying to get through.  Stacey and I survived another spring work season, meaning he’s back to working 5-days a week instead of 6.  This leaves us with a whole extra day to get things done. WOW.  I’m stressing with all the work I’m doing and trying to coordinate the care for my kids, but I do LOVE my job and find solace in having something that is my own outside the home, that I feel passionate about.  I am lucky to have found such a perfect fit for me.

Last but certainly not least is my mom.  She’s doing really well, considering she was diagnosed with Ductal Carcinoma In Situ (AKA -  DCIS) which is a VERY treatable, non-spreadable form of breast cancer.  She has had the offending calcifications and lesion removed and will undergo 6 weeks of radiation and then a possible follow-up treatment afterwards, but that should be it.  No chemo and we expect a full recovery.


So I think that covers everyone – for the most part anyway.  This is what happens when I don’t update for awhile.  So much to say. . . will update after our Hem/Oc appointment. . .
Posted by Mama Mason-Mann at 8:38 PM No comments:

I have been at a loss for words since the Newtown shootings.  What is there to say, really?  I mean life goes on. . . well for the rest of it. . . it has to.  But I’ve found it difficult to sit down and write about everyday life when such a tremendous national tragedy has taken place.  My heart is heavy, if not full out broken, but it is time to write again.  It is time to live and appreciate life, again.  So I will find the words today, not about the tragedy, because really there are none, but I will return to updating on our goings on.

Where to begin.  I guess with Chloe.  Where else (ha ha).  Anyway, she’s still that bright light that shines in my life, bringing me joy in ways I never expected.  Don’t get me wrong. . .she’s still the same challenge as always. . . climbing on tables, writing on walls and chairs, getting into EVERYTHING, but after a recent week with Chloe’s younger 2-year-old cousin, I was able to realize how far she’s come.  I’ve often thought of her at 4 as much like a 2-year-old, but after spending a whole week with a 2 year old, she really isn’t.  She isn’t really a 4-year-old either.  She’s just CHLOE.  And for now, I’m rejoicing in that.  Her latest thing?  Running around laughing hysterically.  I mean, how could you resist that?  Her “personality” is as strong as ever, but she seems to be happier with each passing day.  I’m not sure I thought that was possible.  Of course she is still stubborn and has her OWN opinion about how things are going to go (like the routine at school – she thinks SHE’S in charge!  haa haa), but there is this joy about her lately.  A laugh that cannot be resisted.  A smile that brightens even the darkest of days.

What else is going on with her, you wonder?  Well, we got new glasses.  They fit MUCH better but are a little less sturdy.  Specs 4 Us – made just for kiddos with Ds.  She looks stinkin’ adorable in them, if you ask me, BUT that doesn’t make her any more motivated to wear them.  At least with this pair however, she does fold them neatly up and puts them down instead of heave-hoeing them across the room.  Ah the small accomplishments. 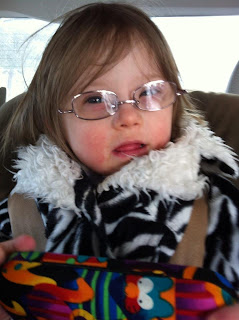 The other kids are good.  Busy as usual.  Xander is turning 12 – the magical “I can sit in the front seat now 12!”  He feels like a big kid already.  He’s still busy with hockey and struggling in school, but we’re working on that.  Generally he’s doing well and in good spirits when he’s home.  And Sadie.  What to say about Sadie.  She’s still all girl.  Quickly lost interest in soccer.  We’re going to try lacrosse next.  She’s got a busy elaborate imagination that keeps her occupied for hours.  She’s doing GREAT in school both academically and socially.  She’s found a good fit so far with her teachers.

Stac and I are great.  We had a WONDERFUL holiday break surrounded by family.  It was truly a special time.  As much as my sister thought we’d be relieved to “have our house back” it just isn’t the same without them here! 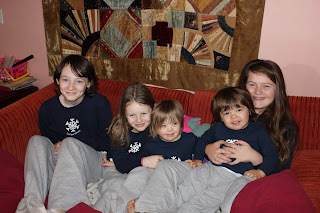 For someone who had “no words” I’ve run my mouth pretty well.  I have another post brewing, but I’ll save that for another day.  Hope everyone is well and that you’re all finding time to enjoy and appreciate each other.  Happy New Year to all.
Amy
Posted by Mama Mason-Mann at 8:44 PM No comments: