Keeping Me on My Toes!

I went to change Chloe this morning and when I lifted up her PJ shirt I found her G-Tube deflated, just lying on her belly (ON, not IN!). Since I didn't know how long it had been out I called Pedi Surgery to see if I needed to come in or not and indeed, they wanted me to make the trek to the emergency department so a surgeon could look at it. Well, after driving all the way there no one from surgery even came to look at it because since she hadn't used it for 2 1/2 months they decided to leave it out!!!! We will see her surgeon on Monday. The plan is to let it close on its own. If it doesn't close after a week, then they will schedule a procedure to close it up. Too bad we couldn't determine that over the phone, but at least it's all good! It's got a bandage on it for the "oozing" of stomach contents which I need to stay on top of and change frequently, but I can handle that. What a big girl! No more g-tube (okay, can I confess I'm a little nervous to have lost the safety net!!! I know, she'll do great, and she's ready, but there was something comforting about keeping it in for 6 months after she stopped using it - that was the original plan). I guess when Chloe decides she's ready, that's it!

Below is a pic of her sitting in her stroller in the ED. The resident that treated her was an intern when Chloe was first admitted 2 years ago. She was THRILLED to see Chloe doing so well. :) 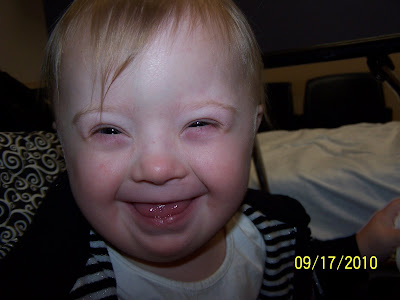