Those are the words recently used to describe our dear sweet Chloe. I have to admit, I had to look up what the heck it was, but just from the sound of it, I figured it would fit her. According to Wikipedia.com, they are known as the Whirling Dervishes due to their famous practice of whirling (spinning one’s body in repetitive circles). Chloe does go through life spinning away. Tasmanian Devil also comes to mind. . . I picture her spinning through the house wiping things out as she goes, leaving a path of destruction behind. Or maybe even better yet, an octopus with many arms and tentacles, reaching for and touching, and yes, exploring, EVERYTHING she comes into contact with. A simple example has to be bedtime in the bathroom. She just had a good soaking and it’s time to get her out, while her sister remains in the tub finishing up. I’ve got her all dry and dressed and reach quickly for the toothpaste and toothbrush. As I let go of her for a mere second to put the toothpaste ON the brush, she darts (or whirls) over to the tub and in a flash has her hands in the tub and is hoisting a leg up over the side. I quickly grab her, pull her towards me and start brushing her teeth. As I again let her go briefly to get her sister out, Chloe’s fast like lightening speed leads her to the toilet, where plop, her hands are in. ARGH! Hand washing (and ARM washing, for that matter) and a whole new outfit are in order. All that in a quick 5 minutes. And this is typical of Chloe in the world, hands on or in everything, moving from one thing to another. Don’t get me wrong, I appreciate her desire to learn about and explore her world with the zest she exhibits. I truly think it is one of her gifts. From sick baby to this energized, curious little girl, I DO absolutely count our blessings. It’s just that sometimes, and I really do mean just sometimes, I find myself EXHAUSTED. Mentally and physically exhausted. I know that it’s okay and even on those days when I’m not even sure how I’m going to do this, I can think back to those days of struggle that SHE had and realize that this tough little cookie standing before me is just embracing life for what it is – a series of amazing wonders. . . even if it’s water in the tub or water in the toilet (ewww!), it is amazing to HER and I need to respect that.


It’s interesting. . . we spent this past Saturday at the CT Down Syndrome Congress convention. I was extremely moved repeatedly by the key note speaker and his stories of people with Down syndrome and how they have repeatedly overcome the odds, just like our Chloe. But I also found myself afraid at times. I don’t THINK of Chloe as having Down syndrome most of the time. I just think of her as Chloe. It helps me to NOT think about the future with her sometimes. For example, will she ever get out of this toddler-like stage of getting into everything????? Sometimes I don’t want to hear that the answer is she may not for a long time, because that just overwhelms me… to think like that. Because when I look at HER and see HER and not her Down syndrome I can focus on who she is and who I think she will become because of who SHE IS and not what Down syndrome “predicts” she will become. . . but being at the conference reminds me that she does have this thing called Down syndrome. And it is NOT who Chloe is, but is rather a very important PART OF who she is. And that is something I will embrace. 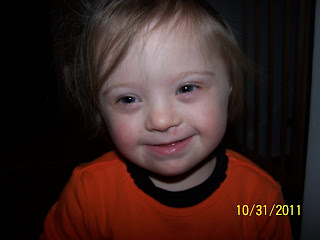