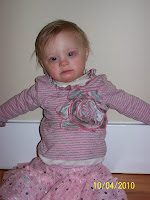 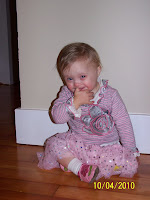 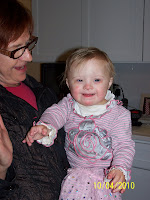 Just wanted to show off this adorable outfit my aunts got for her that she FINALLY grew into. Isn't it just the cutest???!!!
Now for the update. We saw her ENT yesterday and he was actually pleased with what he saw. He really didn't see significant fluid when he looked and he's still inclined to wait on putting tubes in. He doesn't feel that the tests that show the presence of fluid are that accurate in children with Down syndrome because of the make-up of their ears, so he prefers that we wait. He DID, however, want to "get in on it" if surgery is going to be putting her under for the g-tube closure. At the very least he would like to get in there and clean them out and get a good look at them and then if he feels it is necessary at the time, put tubes in. The other question on the table is if she IS put under, should the newborn screening test be done because a) we're not sure if it was done originally and b) they may want new results and if she's going to be having a procedure done, now may be the time to do it. Sooooo, we go to surgery tomorrow and find out if they are going to indeed schedule a closure (which I'm not sure about since she hasn't leaked for several days now) and then we shoot for one-stop-shopping and try to get all this done at once! I'm feeling a little like there are a lot of balls in the air right now, but everything DOES seem to be falling into place.
Oh, and I finally talked to her endorinologist who said she doesn't think she needs to be switched off the generic (should have argued for it, but didn't) and agreed we could order more labs. So after her surgery appointment tomorrow we will go for a blood draw for the thyroid screen and CBC. I expect everything to come back normal as the fatigue seems to be going away. Maybe she just had a virus, or as my mom suggested, is sensing all of our stress in the house (having just moved and not being able to sell our old house, etc., etc.). I also got her an appointment with her eye doc as her eye (and maybe eyeS) is turning in more. Now I'm sorta wondering if they can do THAT while she's under too. . . hmmmmm.
okay, I'll try to update tomorrow.